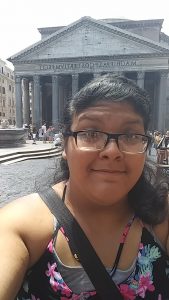 Ever since I could remember, I have loved being in school, which worked for me because there was a constant pressure from my parents to excel academically, since they had not been able to do so. My mother did not finish middle school, having to take care of her younger siblings after her parents died, and my father dropped out of high school, also for personal familial reasons. They wanted me and my twin sister to go further than they had, but it has been a struggle for the last few years, trying to put two girls through college when neither parent is able to work because of medical issues. I had to take a gap year between high school and college because we could not afford to send me to school. I got a job and worked as much as I possibly could and made just enough to cover the first year of school. Since then, I have been taking it semester by semester, hoping that I had saved enough to be able to return to school.

I study Classics, with a concentration in Ancient Greek and Latin Languages, hoping to one day become a Latin teacher. I have always wanted to be a teacher, but it was not until recently that I fell in love with the Latin language. My studies, and more importantly, my professors, are what got me through last year, when my father passed away. They made me realize that professors are more than just educators – they can also be a support system. They have shown me what is means to be a great teacher and have solidified my desire to become one. I want to be for others what they have been for me.