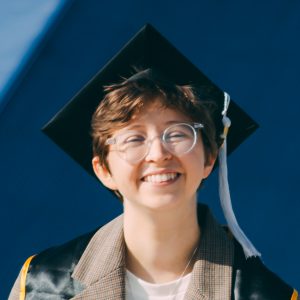 Growing up in Native American communities, it was early on in my life that I saw the discrepancies of inequality. As a kid that was obsessed with movies, the first thing I realized was how I never saw modern Native American portrayals on the screen. Gradually, this observation became something that I wanted to help be the change of. First, I pursued an undergraduate degree in psychology, in order to understand the best ways to decrease the mental processes that lead to prejudice, with a minor in film, to understand how to translate these learnings into the field that I wanted to address. After graduating at the top of my class, I decided to continue my higher education, with a degree that would merge both of my previous fields. Thus, I am pursuing a graduate degree in Entertainment Industry Management, in order to help increase diversity and inclusion measures within the media industry, both on- and off-screen. Not only does this help me pursue my personal goal of increasing representation in media, with an emphasis on indigenous communities, but it also helps me set a professional goal of decreasing discrimination within the media industry. While discrimination, and the prejudice that causes it, will not be cured by my sole intentions and actions—I hope to be a part of the continual movement that fights for equality. Ultimately, I hope this can positively impact my community, through encouraging more media to feature not only indigenous people on-screen, but also indigenous creators in the many positions off-screen.

About the Author: Emily Loeb